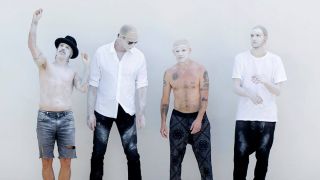 The Red Hot Chili Peppers have recalled being rejected by David Bowie when they asked him to produce two of their albums.

The band wanted Bowie – who died this year – to produce 2002’s By The Way and 2006 effort Stadium Arcadium, but both times he turned them down.

Frontman Anthony Kiedis tells Classic Rock: “He wrote us extremely thoughtful, kind letters explaining why he couldn’t – whether he was busy or just into something else at the moment.

“But a true gentleman, not a guy who just blows you off without an explanation.”

The Chili Peppers feature in the new issue of Classic Rock magazine, which hits the street on July 13 (Wednesday) and is available to TeamRock+ members now.

Kiedis and bass player Flea also give their view on the contest to be the next President of the USA, with Democrat Hillary Clinton set to face off against Republican Donald Trump.

Kiedis says: “He’s not a likeable person. He’s a cartoon of a person. He says very unrealistic things about Muslims and race in general that make no sense at all. Because people are just people, y’know? Good and bad in all race and all religion.

“But sadly the real conundrum is that Hillary is not any better. She is just as much of a tyrant.”

Flea adds: “It’s terrifying. And the thing that’s so crazy to me is all the people that love him. I understand they’re frustrated with politicians and the political process, and they’re unhappy.

“But why is this guy, who was born wealthy, who his whole life… he’s shown clearly that all he’s ever cared about is getting as much money and power for himself, and he’s never cared about anybody. So why do these people think he would care about them?”

The band’s 11th album The Getaway was released last month and they have a number of tour dates remaining in 2016.