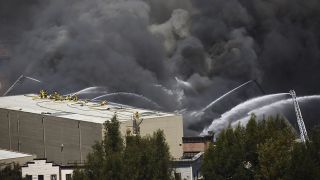 Firefighters tackle a blaze at a back lot of Universal Studios in 2008 (Image credit: Ted Soqui/Corbis - Getty)

Last week it was reported that tens of thousands of master tapes may have been wiped out during the fire that swept through Hollywood's Universal Studios in 2008.

It was originally believed that music archives were safe after the blaze, which destroyed movie facades and a vault containing thousands of videos and reels, but The New York Times claim that music from some of the biggest names in music history were also destroyed in the fire.

Now, The Los Angeles Times report that the recent revelations could be followed by legal action from some of the artists affected.

Lawyer Howard King from King, Holmes, Paterno & Soriano told the Times: “We have many very concerned clients. This has a potentially huge impact on their future, coupled with the rather disturbing fact that no one ever told them that their intellectual property may have been destroyed.

“There is a significant amount of discussion going on, and there will be formal action taken.”

King didn’t mention specific artists, but added that “more than 10 but fewer than 100 clients” were taking legal advice on the matter.

Last week, it was reported that an estimated 500,000 songs could have been lost, including work by Louis Armstrong, Duke Ellington, B.B. King and most of Chuck Berry’s Chess masters and multitrack masters.

In light of The New York Times article, Universal Music Group issued a statement on Variety disputing the findings, saying the piece contained “numerous inaccuracies, misleading statements, contradictions and fundamental misunderstandings of the scope of the incident and affected assets.”