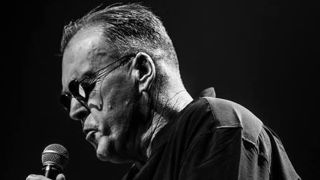 United Progressive Fraternity, the international prog collective fronted by former Unitopia singer Mark Trueack and Resistor's Steve Unruh, have announced they have signed to GEP and will release their new album, Planetary Overload, early in 2019.

The new work, the band's first since 2014's Falling In Love With The World, will be released in two parts, with Planetary Overload: Loss arriving in early 2019. As the title implies, there's a strong environmental message behind the album.

"Our planet is not happy in so many ways; our climate is constantly changing, religious intolerance leads to conflict, bloodshed, and outright war in an already unstable social system," Trueack explained to Prog. "If projects like ours can make a difference and if we can involve our friends and other lovers of music then we will have a better world."

The new album will feature a host of guest musicians, including Steve Hackett, Jerry Marotta, Nick Magnus, Hasse Fröberg, Michel St-Père and more. Artist Ed Unitsky will return to create new artwork for the project which comes endorsed by a host of scientists and corporations.

Steve Hackett adds: “The idea of loss and hope is vital as a driving force behind this CD. Whilst there is so much carnage and violence in today’s world, awareness is growing at a fast rate and indeed hope is reflected by all our sentiments and actions. Music can lead the way, with a message of love over hatred and the need to care for both the planet and all its’ inhabitants. I am proud to be a part of this project”.