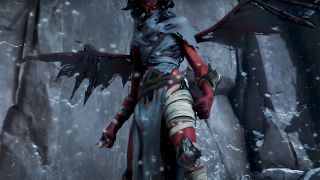 A new video game has been announced which will see players embrace the power of metal as they cut down hordes of demonic beasts.

The first-person shooter is titled Metal: Hellsinger and it’ll be out in 2021 on PlayStation 4, Xbox One, PC and next gen consoles. And while the title speaks for itself, the soundtrack will include Trivium’s Matt Heafy, Arch Enemy’s Alissa White-Gluz, Soilwork’s Björn Strid and Dark Tranquillity’s Mikael Stanne.

The game is being developed by The Outsiders and will be published by Funcom – but those expecting the usual run and gun fare of standard first-person shooters will be in for a surprise as players will be asked to “Slay to the beat.”

A statement on the game's Steam page reads: “Metal: Hellsinger is a rhythm FPS, where your ability to shoot on the beat will enhance your gameplay experience. The more in sync you are with the rhythm, the more intense the music will become and the more destruction you will cause.

“Defeat the demon hordes with a skull-clad blade or a wide range of murderous guns. Each weapon has its own ultimate ability, such as Murder of Crows or The Big Goodbye.

“Every track is created specifically for the game with vocals by metal icons, such as Matt Heafy, Mikael Stanne, Björn Strid and Alissa White-Gluz.”

You can watch a trailer for Metal: Hellsinger below and visit the official website for further information.