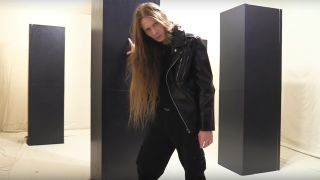 Jered Threatin, aka Jered Eames, made headlines across the rock world last year thanks to his disastrous UK and European tour.

The tour turned into a chaotic mess when he played to empty halls, with it later emerging that he faked a publicist to entice venues to book him and his band, while dubious websites associated with the vocalist and guitarist were all registered at the same domain registrar around the same time.

He then issued a statement on Twitter to say that the joke was on us and that he had “turned an empty room into an international headline” adding: “If you are reading this, you are part of the illusion.”

And as if that wasn’t enough, he told the BBC last month that in an effort to generate publicity, he attempted to tip off the media to his scheme by sending an anonymous email ahead of the tour.

But the notorious rocker seems to have put all that behind him and has revealed that he’ll return to the UK for a show at The Underworld in London on November 1, “A year to the day where it all began.”

The vocalist and guitarist posted the news on Facebook overnight – and the event page associated with the show suggests that, at the time of writing, 105 people are going while another 318 are interested.

But can we believe it? We shall see.

Despite the negativity surrounding Threatin, he told the BBC that he “came home to literally thousands and thousands of CD sales,” adding: “I have a cult following.”

He also reported he’s been in meetings with film producers who want to turn the 2018 tour and subsequent fallout into a movie.

In November, Classic Rock ordered a t-shirt from Threatin's online store. At the time of writing it has not been received, and emails questioning the order's status remain unanswered.