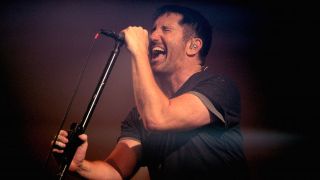 Nine Inch Nails kicked off their Cold And Black And Infinite tour by unveiling new song God Break Down The Door and covering David Bowie’s I’m Afraid Of Americans.

Trent Reznor’s industrial icons opened the tour on June 13 with the first of three nights at the Joint at the Hard Rock Hotel & Casino in Las Vegas.

They opened the show with a cover of Gary Numan’s 1979 electro-pop classic Metal, which appeared on NIN’s 2000 remix album Things Fall Apart.

They also played new song God Break Down The Door for the first time. The drum’n’bass-influenced track appears on their forthcoming Bad Witch EP. The EP is released on June 22., two days before they play the Royal Albert Hall in London.

The set spanned their 30-year career, and included classics like Head Like A Hole and March Of The Pigs as well as newer track such as Came Back Haunted from 2013’s Hesitation Marks.