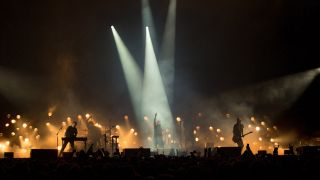 The performance will take place on June 24 and will mark the first time that Trent Reznor and co have played at the iconic venue.

Artistic director at the Royal Albert Hall, Lucy Noble, says: “We’re delighted to announce the Hall debut of one of the most innovative, influential and important rock acts of recent decades – the incomparable Nine Inch Nails.

“This career-spanning show will showcase the singular genius of Trent Reznor in a suitably iconic setting.”

Support on the night will be provided by Black Moth Super Rainbow, with tickets set to go on sale at 12noon tomorrow (Friday, March 16) priced between £35-£75.

Nine Inch Nails released their five-track Add Violence EP last summer, with the band going on to appear in episode eight of Twin Peaks: The Return, where they performed the track She’s Gone Away.