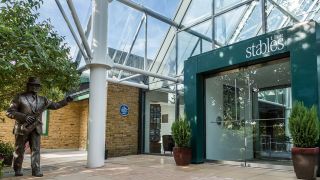 Popular Milton Keynes venue The Stables has been saved after continued moves by developers to build residences near to the venue, placing them under threat due to noise complaints.

In June we reported that despite being told Abbey Homes would have to apply for a Deed Of Easement safeguarding the venue from complaints from residents who move in despite knowing there's a venue nearby. However the developers did not enter into discussions, but rather submitted a Reserved Matters application for 79 houses to be built on the western half of the site..

Last night Milton Keynes Council voted unanimously to place a Deed Of Easement on the approved developments, meaning that any potential new residents would be informed of the music venue and associated noise before they purchase a property, and will have their rights to make any complaints restricted.

In a statement on their Facebook stage, the venue stated: "Thank you to everyone who turned up tonight - we had more supporters than there were chairs. The Council Members voted for the Development to be approved with a Deed of Easement. This is a great result and a big thank you for making your voices heard."