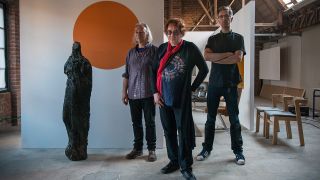 The follow-up to 2016’s Pages Of Aquarius is titled Angel In The Detail and it’ll be released on August 23 through Metropolis Records.

The new record is described as “an enthralling, captivating release on which Ka-Spel’s distinctive vocals and lyrical imagery float over textural ambience, hypnotic guitar, synth washes and spellbinding bass pulses.”

The band add in a statement: “Even on the darkest day. Even on the longest night. Even when there seems to be no hope left. Even when you surf the channels and see only monsters. Even little you, little me, pacing our way through a forest of dark menacing shadows wondering if the great creator had simply sneezed upon the candle we need to guide us through to kinder pastures. Even now my friends, there is an Angel In The Detail.

“An album two years in the making. There were a few diversions, a few questions never answered, and a cloud full of value moments.

“The latter have been preserved for you here and many will be related live on the forthcoming Legendary Pink Dots 40th anniversary tour. In fact, we turn 40 in August 2020, but I guess there is no harm in starting things early.”

Those shows will take place throughout October across North America. Find further details below.