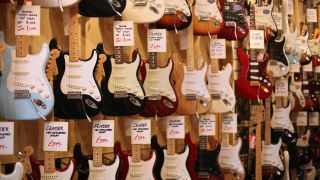 In 2009, London lost one of its most beloved live venues, when the Astoria was knocked down. It went as part of a radical overhaul of this part of Central London, to make way for the Crossrail Link. But the loss of the Astoria has become the tip of a sinking, stinking iceberg, one that now threatens to completely obliterate Denmark Street, arguably the most historical music-related street in London.

Dubbed Tin Pan Alley since the late 1950s, it’s been a shangri-la for musicians since rock’n’roll first took up residence on every street corner.

“You can do everything in Denmark Street. Join a band. Buy all the instruments. Get them repaired. Play live. And record. All the facilities are there,” explains Alex Jackson.

Jackson is part of Round Boy Pictures, an independent company who are currently making a documentary on Denmark Street, capturing not only the imminent demise, but also its unique atmosphere.

He and his partner Roman O’Toole-Howes began the project three years ago, at which point it had a very different concept.

“We were going to do a series of five short documentaries, each focusing on one of the characters in the street,” says O’Toole-Howes. “We’d met a guitar maker called Phillipe Dubreauille, and it all began with him, really. He makes incredible guitars from a workshop in Denmark Street, and that began us thinking about this series on the workshops around there.”

But as they started to get into the project, the intrepid film makers realised the story was a lot bigger than they first anticipated.

“There’s just so much going on in Denmark Street, so we expanded our ideas,” says O’Toole-Howes. “And then it was announced that the street was to be totally renovated, and all of the shops there are to be shut down. So, we’ve now extended the filming into December this year, to get footage of what’s going on now.”

Round Boy Pictures now has a base in Denmark Place (Denmark Place Studio), which is an alleyway just behind Denmark Street, and is part of the music fabric of the area. However, they have also fallen foul to the restructuring plans, as Jackson explains.

“Enterprise Studios (a major rehearsal and recording facility in Denmark Place) has been told they will be shutting on December 16. And it looks like everyone in the alleyway will be moved out at the same time. Our problem is that we sub-let, and so far we’ve not been told officially that we have to go as well. But it does seem that way.”

What Round Boy have also discovered is that many of the leaseholders in the area have already been persuaded by the landlords to reduce the period of notice to vacate their shops from three months to a single month.

“We’re not sure why anyone would agree to this, but they have done it. So, it’s a lot easier to get them out quickly,” reveals Jackson.

Officially, there is a commitment from everyone involved in the street renovation scheme to retain the musical integrity built up over such a long period. But, like everyone else in Denmark Street, O’Toole-Howes remains very sceptical about what this means.

“If these people are so committed to continuing the street’s musical heritage, then why aren’t they telling everyone what the plans for the future are? Ultimately, it’ll be big money that talks, and nobody is paying any attention to the fact that Denmark Street has a special atmosphere all of its own. You can walk into a guitar shop down there at any time, and find people jamming. It’s amazing. Now, those who’ve helped to foster this whole relationship are being kicked out. And does anyone care where they go?”

All of this building work is being done to take advantage of what the new Crossrail Link at Tottenham Court Road Station will create.

“There should be a lot more people coming through the area, and that means more money,” sighs O’Toole-Howes. “So, under those circumstances, can you really see businesses connected with music being encouraged to move in? Most people currently in Denmark Street don’t believe that nonsense of retaining the musical integrity of the region. It makes more economic sense to go in a different direction.”

“We’ve been told that the Crossrail Link will be of huge benefit to the area and rejuvenate this part of London,” adds Jackson. “But I’d like someone to explain how this will work, and tell us what will be done, if anything, to protect the music outlets in Denmark Street.”

There are plans to build a new West End theatre on the site of the Astoria. But will this host live gigs at all? And what about Metro, another live venue to fall victim to the Crossrail devastation five years ago? Are there plans to replace this with a like-minded club?

“Besides, this whole concept seems to be based on improving the connection between East and West London,” says O’Toole-Howes. “But we’ve got the Central Line doing that right now. By all means upgrade Tottenham Court Road Station. But surely this could be done without destroying everything around? And then, just make the Central Line more efficient. The new trains might shave a few minutes off a journey, but is that so important? To get this time saving, the powers-that-be are killing a heritage, ”

Such is the commitment of the Round Boys that they’re financing the documentary themselves.

“We’re independent film makers,” explains O’Toole-Howes. “So, we’re using funds from other short films and videos to do this. It is a labour of love. We did try a Kickstarter campaign recently, looking to raise £15,000, but it was a flop. We got less than £900 pledged. The problem is that we’re film makers, and have no clue about marketing and promotion. We’re rubbish at it, really. We do need investment, though, to finish the film. Right now, we’re looking at ways to accomplish this.”

The documentary will be titled The Demise Of Denmark Street, and the aim is to have it ready for screening at selected festivals in the summer.

“We also hope to get it shown on TV as well next year,” concludes Jackson. “If you’re a music fan, then what’s happening to Denmark Street should affect you. In terms of live music - the 12 Bar and Alleycats are currently there - and instrument manufacture and repair, its loss will be a heavy blow. One London might not recover from. There is nothing else like it.”

It might be too late to change the minds of those who control the fate of Denmark Street, although there is a petition being circulated to try and save the 12 Bar. But maybe this film can bring the benefits and facilities it offers, and deter others in the future from continuing the culling of rock’n’roll in this country.

If you want to find out more, visit the Demise Of Denmark Street Facebook page.

Read more: Is your favourite venue about to close?