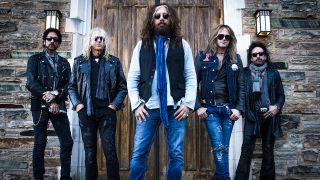 The Dead Daisies have announced that they’ll release an album of covers later this year.

The collection is titled Locked And Loaded and it’s set to arrive on August 23 on DigiPak CD, coloured vinyl with CD, and on digital and streaming platforms through Spitfire Music.

It’ll feature a total of 10 studio tracks and live cuts originally recorded by artists including The Who, The Beatles, Deep Purple, Neil Young, Creedence Clearwater Revival and Grand Funk Railroad.

Frontman John Corabi says: “This is a tip of the hat to our heroes – bands that influenced us when we used to buy their records as teenagers.

‘Now we've put them all on one album and it seriously rocks! You may think of us as ‘rock stars' but at the end of the day we're just huge music fans!”

Guitarist Doug Aldrich adds: “Playing these songs live is a total adrenaline rush for all of us. Our audiences go nuts with our 'Daisified' versions of these songs that come from an incredible time in music. It's our way of paying homage to the greats of rock."

Locked And Loaded in now available to pre-order. Find details below.

The Dead Daisies: Locked And Loaded
The Dead Daisies will pay tribute to their musical heroes with this covers album, which will be released in August. It'll feature covers of songs originally recorded by The Who, The Beatles and more.View Deal