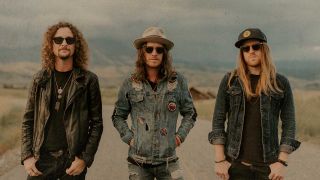 The Cadillac Three have launched new single Hard Out Here For A Country Boy, a greasy chunk of country funk that celebrates a litany of glorious redneck cliches: cold beer, hot girls and more.

Hard Out Here For A Country Boy also features country music stars Chris Janson and Travis Tritt, and comes from the band's upcoming fourth album Country Fuzz, due to be released on February 7 on Big Machine Records.

"We were playing some tour dates with ‪Travis Tritt and The ‪Charlie Daniels Band when Hard Out Here For A Country Boy was written," says frontman Jaren Johnston. "He was on the bus when we were playing through some songs and with his big signature twang belted out the line. I grew up listening to Travis, and he’s a big reason I sing the way I do – that gritty twang thing. We knew he had to be on the song."

“This song was kind of a jumping off point for the record and one of the first we cut," adds drummer Neil Mason. "We’ve all been buddies for years and Chris heard the song playing in the background during a call with Jaren. It was cool that he quickly wanted to be a part of it and cut the vocal the next day."

The album also features the singles All The Makin’s Of A Saturday Night, Crackin’ Cold Ones With The Boys and Slow Rollin'.

"This record and this band are all of that. But it's also ZZ Top and Jerry Reed. It's Medeski Martin & Wood and Prince. There's no better way to describe who we are than Country Fuzz."

The Cadillac Three are part of the Country 2 Country UK and European tour alongside Luke Combs, Darius Rucker and Eric Church. It’ll stop off in Berlin, Amsterdam, London, Glasgow and Dublin in March next year.

Tickets are on sale now. Find further details below.