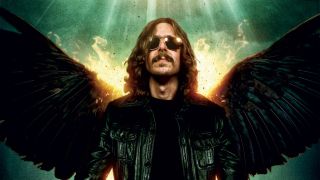 To celebrate having the prog metal titans Opeth on the cover of the new issue, we've put together this collection of his wisest words in the feature. And there's much more where this came from...

To read the full interview with Mikael, pick up the new issue of Metal Hammer here.

Mikael Is Not A 1D Fan

“Watching One Direction kinda felt like they’d just dragged up five guys from the crowd… if there were guys in the crowd!”

He’s All About Defiance

“Metal should be rebellious, even within its own genre.”* *

And He Sees Room For Improvement

“There are lots of bands that don’t seem to like what they’re doing.”* *

He Does It Out Of Love

“Maybe what we are doing is rebelling against metal, but only ‘cause we love it so much.”* *

“A lot of metal bands don’t have the guts to experiment.”

He Is Aware Of Opeth’s Critics

“I’m not stupid, I can hear people saying we’re not a heavy metal band anymore.”* *

He Was Once A Hardcore Gamer

“A woman died in a fire while I was up all night playing Phantasmagoria.”* *

Being In A Band Was Always Mikael’s Dream

“I used to saw toy guitars out of my desk so I could mime in front of the mirror.”

Prog Isn’t The Be All And End All

“If we made another heavy record, it’d be pure death metal with blastbeats and shit.”

“I used to only say thank you because I was shy. I still am shy.”

Find out more about our new issue here. And you can pick up your copy here.