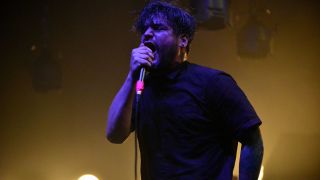 It’s their second release with the frontman following the death of Mitch Lucker in 2012. Hermida debuted on 2014’s You Can’t Stop Me – and he says this record has cemented his status as a fully-fledged member of the group.

He tells Rockwell Unscene: “We’re extremely excited. The band is taking a freight train that has been moving at 200 miles an hour and turning the wheel completely left. And we’re hoping to see the aftermath.

“The jacket is on, it’s on. I can’t wait to bring this out. This is a real statement of who I am, who the band is, and where we come from.”

Hermida says working with producer Ross Robinson, who has overseen records by Korn, Slipnot and Sepultura, has brought out a “fearlessness” in the band which wasn’t there before.

He adds: “There’s also a comfort in obscurity that we didn’t have before. It’s one of those deals where it’s, like, everything that could potentially go wrong is what I want. And I can’t wait for all the beautiful comments that are gonna be coming, all the beautiful words that people have to say.”

Watch the full interview below.

Suicide Silence recently announced that they’ve pushed back their UK tour with Caliban, due to take place this month, until next March due to “unforeseen circumstances.”