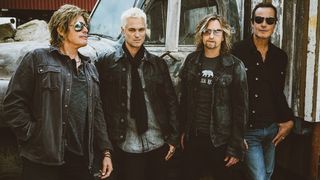 Stone Temple Pilots have revealed the identity of their new singer.

It was rumoured in November last year that the band had recruited former X Factor contestant Jeff Gutt – and it’s now been confirmed that it is indeed Gutt who will be behind the mic going forward.

The vocalist made his live debut with the band last night at a private show at the Troubadour in Los Angeles, where among other songs, they premiered their new track Meadow, which can be heard below.

Gutt has spent the last year writing and recording with founding members Dean DeLeo, Robert DeLeo and Eric Kretz, with a new, as-yet-untitled album due in spring 2018 via Atlantic/Rhino to coincide with a planned North American tour.

Dean DeLeo says: “We wanted someone who would not only do our earlier songs justice, but would also write new songs and carve out a different path forward with us. It took some time, but we found our guy.”

Stone Temple Pilots launched a worldwide search for a new vocalist in February 2016 after Chester Bennington left the band to concentrate on Linkin Park. The band received and reviewed 15,000 submissions online before selecting more than 30 singers to audition in person with the group at Studio 606 in LA.

Gutt sang with the band on the last day of auditions and was the only one who hadn’t submitted music online. Instead, he was invited after Robert DeLeo heard about Gutt after DeLeo had played a show in Detroit with Hollywood Vampires.

Robert DeLeo says: “Talk about a happy accident. It was clear right away that Jeff had the range to sing vocally challenging songs like Piece Of Pie and Interstate Love Song. But we soon discovered that he also has a great ear for melody and knew how to write a song.”

Kretz adds: “The chemistry was there from the start, and Jeff kept coming up with one great melody after another. We ended up finishing 14 songs, which is the most that Stone Temple Pilots has ever recorded for an album.”

Gutt reports that he’s prepared for the inevitable comparisons to original Stone Temple Pilots’ vocalist Scott Weiland, who died in 2015.

“No one will ever fill Scott’s shoes and I’m not trying to – he’s a legend, Gutt says. “But these songs deserve to be performed and people want to hear them. I’m just honoured that the guys chose me to help them continue to build this band’s legacy.”

Aside from two stints on the American reality TV series, Gutt was also the singer in Californian nu metal outfit Dry Cell.

Last night’s concert will be broadcast this Friday (November 17) at 5pm ET exclusively on SiriusXM and can be heard on Howard Stern’s Howard 101 channel, as well as Lithium.

Stone Temple Pilots: "We wanted to make an indelible mark on the face of music"