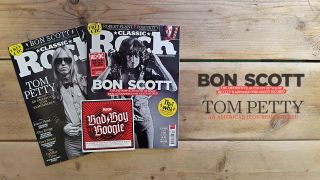 The December 2017 issue of Classic Rock is out today. We’ve produced two different covers: one shines new light on the death of one of rock’s great frontman, while the other celebrates the life of a true American icon.

Bon Scott
Exactly when, where and, especially, how did Bon Scott die? We’ve got an exclusive extract from a new book that presents startling new evidence that throws intriguing new light on a dark story.

Tom Petty
Jaan Uhelszki looks back at the life, times and music of one of the great American songwriters of the past 40 years, who died last month at the age of 66.

Feeder
“I never got into this to be a ‘rock star’.” Grant Nicholas marks his band’s silver anniversary with a look back at a career defined by solid-gold hits and tragic loss.

Gary Moore
When he teamed up with Jack Bruce and Ginger Baker in the ‘ersatz Cream’ BBM, it was a dream come true for the guitarist – but one that was over almost as soon as it began.

John Entwistle
“I just wanted to be louder than anyone else.” The not so quiet (in more ways than one) Quiet One was a key part of The Who’s sound – and also of their combustible chemistry.

Joey Tempest
Gold discs are for show-offs. The world is getting scarier. Beer and wine are good, drugs are bad. Be kind to your fans… The man born Rolf Larsson gives us his take on life.

The Cadillac Three
We joined Nashville’s hottest trio on the road in Ohio to talk new music, returning to the UK and their amazing rise to success.

The Dirt
Go on the road (sort of) with Led Zep, Queen, Springsteen and more… Judas Priest (finally!) and Bon Jovi among the nominees for the Rock And Roll Hall Of Fame… Dweezil Zappa and Adrian Belew say they want nothing to do with Frank Zappa hologram tour… Welcome back Robin Beck, Evanescence and Heavy Pettin… Say hello to Rews and The Dust Coda, say goodbye to Harold Pendleton, Jack Good, Johnny Sandlin…

Raw Power
Find out why every one of Fender’s new limited-edition Front Row Legend Esquire guitars has seen some arse action.

The Stories Behind The Songs - Mr. Big
Written by a teenaged Eric Martin to impress a girl, years later To Be With You gave his band their biggest hit.

Buyer’s Guide: The Doors
Looking to grab albums by one of the most iconic bands of the 60s but don’t know where to start? Let us light your fire.

Heavy Load - Bootsy Collins
The funk master gets down on playing with James Brown, learning from Hendrix, LSD, supernature and The One.