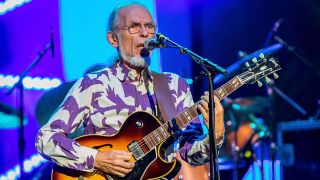 Steve Howe says that Yes have given some thought to new material.

The guitarist reports that they have “ideas” but is currently keeping his cards close to his chest.

He tells Billboard: “We’ve got an interim period where we’re going to be fairly secretive about what we’re up to.

“Maybe we’re building up repertoire for a future project, but we can’t say. We’ve got ideas, but I can’t say more than this right now.”

Howe’s son Virgil died unexpectedly in September at the age of 41, shortly after he and the guitarist had completed recording their collaborative album Nexus.

It launched last month via InsideOut Music – and the guitarist says there’s enough material that wasn’t used for “another adventure.”

Howe continues: “Since Virgil passed away, I’ve done an update on what’s around. There’s a fair bit of material there that could be developed into the same sort of area, because I wouldn’t like it to be too radically different than Nexus.

“But basically there is sufficient music for another adventure.”

Reflecting on Nexus, Howe says: “It’s become a kind of memorial to him, his legacy. It’s a great opportunity to pay homage to him. It gives me pleasure. It’s very warm. It’s a record that’s made with great pleasantry and great ambitions and didn’t have an endless amount of problems.

“Now it’s had a big problem, if you like, in the fact that Virgil can’t be here to see this reaction. But I enjoy it immensely.”

Yes will head out on tour across the UK and Europe in March to celebrate their 50th anniversary.

Steve Howe: The 10 Records That Changed My Life