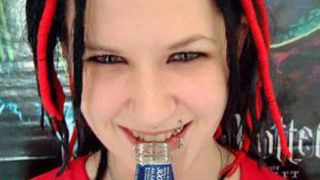 The mother of murdered goth Sophie Lancaster has been presented with an Order Of The British Empire honour by Prince Charles at Buckingham Palace.

Sylvia Lancaster set up a charitable foundation in her daughter’s memory after Sophie was beaten to death in 2007. The 20-year-old sustained fatal injuries while trying to protect boyfriend Robert Maltby, who survived the assault. The pair had been attacked because they were wearing goth-style clothing.

The Sophie Lancaster Foundation aims to tackle hate crimes by educating people about subcultures and spreading a message of tolerance.

Sylvia, who was told she’d receive the honour earlier this year, tells ITV: “Prince Charles talked about Sophie and about gang culture. I’m sure she would be proud. It’s not just about the work that we do – it’s a validation of alternative subcultures as well.

“I’ve got a velvet bag with a skull on it that represents subcultures that I wanted to bring with me. When I was younger I was always quite different, but I never had the balls to dress like that – but I like the touches.”

Ryan Herbert and Brendan Harris were jailed for life in 2008 for Lancaster’s murder and for causing grievous bodily harm to Maltby. Sophie has had a stage named after her at the Bloodstock festival since 2009 and the event continues to support the foundation. Find out more on the official site.