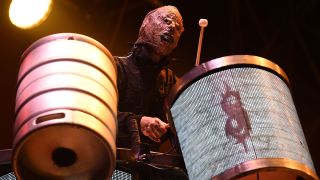 Corey Taylor says new Slipknot member, affectionately know as Tortilla Man, has brought fresh energy into the band – and has recalled the moment when the percussionist injured himself onstage.

Taylor was recently speaking with Rock Antenne as the band continue to tour across Europe in support of their 2019 album We Are Not Your Kind.

Asked if unpredictable things still happen onstage, Taylor replies: “You have to be careful of the new guy – new guy gets crazy. He almost got docked some money because he almost broke Jay Weinberg’s drums the other night.

“He’s the fly in the ointment, he’s the pube in the Coke. Every time I turn around, he’s doing something weird, so I started chasing him just to make sure I’m keeping track of his habits.

“Honestly, that energy is dope – it’s really good. He’s so into it that it reminds me to be into it. After this many years, you can get out there and the audience is obviously going to invigorate you, but you can find yourself kind of, I don’t want to say ‘going through the motions,’ but it’s almost automatic – like muscle memory.

“Then this guy comes out of nowhere and he’s hanging on people. I was, like, ‘Oh, yeah, that’s fucking Slipknot, dude!’ It gets really weird.”

Taylor adds: “He’s fucking his face up, which I think is funny. He’s got a giant scar right in the middle of his forehead now because he smashed his head into the drums and cut it open.

“He was bleeding during the show, so he had to pull the mask off and they’re bandaging him up. He looked like he’s just been to war – and now he’s got a scar in the middle of his forehead.

“It looks like a coin slot: ‘Somebody put a quarter in the new guy, we’ve got to start the show!’”

Tortilla Man is widely believed to be Michael Pfaff,  a bandmate of Slipknot’s Shawn ‘Clown’ Crahan in Dirty Little Rabbits.

Slipknot’s European tour will come to an end in Helsinki on February 24, with the band then visiting Japan, Indonesia and the Philippines, before their Knotfest Roadshow tour across North America throughout May and June with A Day To Remember, Underoath and Code Orange.

Slipknot will return to Europe over the summer for Knotfest UK at The National Bowl in Milton Keynes and Knotfest At Sea.