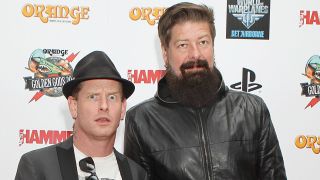 Jim Root says there’s no bad blood between him and Slipknot bandmate Corey Taylor – even though the guitarist was fired from their other outfit Stone Sour.

And he believes the second outfit will never repeat the achievements of their House Of Gold And Bones twin releases, which he helped create before being dismissed.

The lineup change came about last year although it was only made public months later.

Root tells Triple J: “I’ve never had a problem with Corey. Corey and I understand each other a lot better than anybody else from the bands could, because we’ve been pulling double duty for all these years. Other people who don’t share that common thing could never really understand.”

Reflecting that his departure has a positive side, the guitarist continues: “After a while you become so spread thin that it becomes really hard to give a hundred percent to both things. There comes a time where you have to say, ‘Enough is enough – I need to put my focus into what it is that made this possible for all of us,’

“Let’s face it: Slipknot is a world-class, cult-status band, and it’s where my passion lies. That’s not to say I’m not passionate about Stone Sour. I’m absolutely passionate about everything that I contributed. But there are certain people in that band that have a different idea of what Stone Sour should be, and I don’t want be in a radio band, so to speak.

“I’d rather be creative, be artistic, be able to play intricate music that moves and takes you on a journey. About the closest Stone Sour ever came to that were the two records we just released, and I don’t know that they’ll ever do that again in the future.”

Taylor recently hailed Root’s writing on Slipknot’s latest album .5: The Gray Chapter, released this week. He later insisted that the firing hadn’t been his decision.

Both of the band’s sets at this weekend’s Knotfest will be streamed online for free, alongside highlights from almost every other act’s performances.