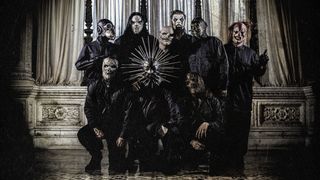 Slipknot percussionist Shawn ‘Clown’ Crahan says the band are in the early stages of writing material for a new album.

The band are using their downtime while frontman Corey Taylor concentrates on Stone Sour to put ideas in place for what will be the follow-up to 2014’s .5: The Gray Chapter.

He tells WRIF’s Meltdown (via Blabbermouth): “Well, we’re writing as a band and with Corey as well. Yes, we’re off, and we’re off for a long while. It’s much needed as we’d been touring for three years.

“Corey’s doing what he does which is Stone Sour which is awesome and we’re writing. We’re beginning to write some music for Slipknot for the new record. He’s aware of it, so while we’re writing, he’s getting songs.

“We’re not just gonna sit around because we’ve done that for 20 years – we just feel like writing. We had so much fun writing .5: The Gray Chapter and people that started writing together during this album cycle never wrote together in 15 years, so things are a little bit different and it’s amazing and it’s fun. We have a good time.”

Clown adds: “We don’t need big, fancy studios to write – we can just go to each other’s houses and write. Why would we go in the studio and just spend a bunch of money right now?

“We’re writing for the new record and Corey gets songs. We have a lot of stuff already that we wrote out on the road for the last three years. We have songs that we’ve written that are amazing.”