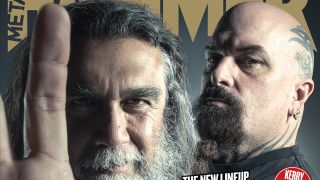 And here it is! For the first time in years the thrash icons and one of the best bands in the world grace the cover of Metal Hammer magazine as we tell the full story of the Slayer’s new album, what’s going on with Dave Lombardo and life after the death of their fallen comrade Jeff Hanneman as the band approach their 35th anniversary. We’ve got all you need and more from the legendary Tom Araya and Kerry King in this must-read interview for any Slayer fan. All together now – SLAYYAAAAAARGHHH!!!

We also step inside the studio with Motörhead to find out what’s in store for the veteran’s 22nd full-length and sit down with Lemmy to who is still playing fast and refusing to get old (even as he approaches 70).

Nu metal has reared its head once more in the form of Coal Chamber’s return. We catch up with frontman and mastermind Dez Fafara to get the scoop on their new album and attitude. Plus we’ve got loads of Nu Metal Battle Cards for you to challenge your mates with – from Mudvayne to Crazy Town.

Our new favourite band King Parrot have also caught the eye of Phil Anselmo with their grinding death and love of getting absolutely wasted. But what’s it all about? We catch up with the brutal Aussies to find out.

We investigate the world of the masked misfits Hollywood Undead who seem to have created a vast army for themselves across the world and yet their brand of rap-metal still splits metalheads everywhere. Can we take them seriously?

And the party-loving glam rockers Steel Panther invite us backstage at their biggest ever UK headline show at Wembley Arena for a glimpse into the full-on debauchery that only the inventors of The Shocker can get away with.

All this plus Tesseract playing on a stage made of 100% ice, Abbath’s life after Immortal, Cancer Bats’ Liam Cormier on his love of Black Sabbath, Blind Guardian’s career of fantasy and Jill Janus’ tales of witchcraft.