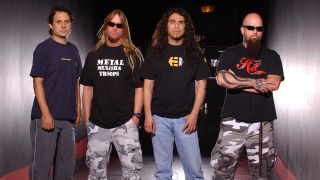 Former Slayer drummer Dave Lombardo says the band’s Tom Araya has wanted to retire for years due to issues with his neck.

Lombardo parted ways with the thrash giants in early 2013 – and with Slayer set to bring the curtain down on their career with a pair of shows at The Forum in Los Angeles on November 29 and 30, Lombardo was asked by Dean Delray on the Let There Be Talk show if he thought this would really be the end for the band.

Confirming he’s had “no communication” with his former bandmates, Lombardo said: “Tom’s been wanting to retire when I was in the band. He wanted to stop.

“He had the neck issues. He’s been wanting to retire for a long time now. So now that he’s got it, I'm happy for him and I hope he gets what he wants out of life and his future.”

Since leaving Slayer, Lombardo has been busy behind the drum kit for Suicidal Tendencies, Misfits and Dead Cross, and will hook up with Mike Patton, Trevor Dunn, Trey Spruance and Anthrax guitarist Scott Ian for three Mr Bungle shows in the US in early 2020.

They’ll play the 1986 demo The Raging Wrath Of The Easter Bunny in its entirely at all three concerts which will take place in Los Angeles, San Francisco and New York in February.

Slayer, meanwhile, will release The Relentless Killogy motion picture on November 8 in conjunction with Nuclear Blast Records and Prime Zero Productions, while the soundtrack from the show will also be available the same day on 2CD, 2LP and streaming platforms.