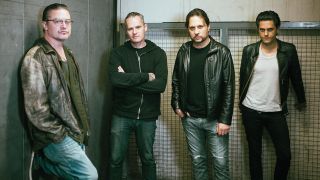 A hardcore supergroup that also features Slayer legend Dave Lombardo alongside the incomparable Mike Patton, not to mention four-string virtuoso Justin Pearson and punk shredder Michael Crain, Dead Cross is an act that contradicts its star power with a surprisingly unassuming origin.

“When everything went down with my previous band, I had booked studio time with Ross Robinson,” Dave recalls. “When I got to the studio, Justin and Michael were there. Ross had called them to help out this singer/songwriter girl who was putting some music together and he wanted us to give it a more ‘alternative’ feel.

“He’s a bit of a genius. He has a way of getting the most out of musicians,” he adds of the famed producer.

“I had read these funny things about him,” Justin chimes in, “like he made the guys from Korn cry and then he made Robert Smith throw his candles at him.”

Under the watchful eye of the controversial Ross, the man behind Slipknot and Korn’s trailblazing self-titled LPs, however, the trio soon went into business for themselves. After a brief stint with original vocalist Gabe Serbian, Dead Cross was completed by the one and only Mike Patton, best known, of course, for his muscular, melodic work with Faith No More. Interestingly, it was Mike that seemed to show the most enthusiasm towards this budding new project.

“When we all got in discussions about the record, Patton was really psyched about it,” states Justin. “The reaction to it was great! It’s kind of a weird thing, though, because – and this might just be me being a weirdo artist – I always think something could be better. Like, I thought this was a good record, but he was way into it, almost too into it. With his vocals added onto it, it totally came to life. It became something totally different to what I was expecting.”

Helmed by the volatile Ross and driven by Mike Patton’s unfiltered wails, Dead Cross’s self-titled debut album landed earlier this month to solid acclaim via Ipecac Records. Providing ceaseless anarchy throughout its brief, 29-minute run-time, Dead Cross has already been compared to one of Dave’s most hailed works, Slayer’s opus Reign In Blood.

“It’s hardcore, it’s fast and that’s what the fans like,” the drummer says of the new record. “Hopefully those fans will enjoy it: Suicidal Tendencies, Misfits, Slayer, every band I’ve played in, as well as Patton and JP. I think the combination of musicians is good and people are going to really look forward to it.”

With their album’s release this month followed by a US tour just days thereafter, Dead Cross will be filling the latter half of 2017 with a more-than-fair dose of immense, awe-inducing hardcore. Brace yourself.

For fans of: The Dillinger Escape Plan, Slayer, Fantômas

Dead Cross is out now via Ipecac