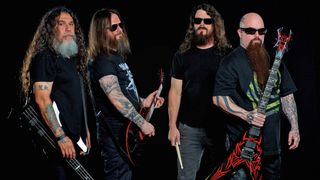 Slayer have announced, via Twitter, that they will be making their exit after one final world tour.

The video, soundtracked by iconic track Raining Blood, showcases a number of Slayer tour posters over the years alongside band pictures and live footage. The accompanying text in the clip reveals that “the end of days is near” and they are bowing out with one final world tour. It goes on to say that North American dates are incoming.

In August 2017, Slayer’s guitarist and founding member Kerry King said that the band could release a new album in 2018, but plans change all the time. There has been no official word as to why Slayer are calling time on their 30+ year career.

In 2010, frontman Tom Araya underwent back surgery in 2010 to address fused vertebrae, meaning that he’s no longer able to headbang or perform with dramatic motions. In 2016, he revealed that it’s getting “harder and harder to come back out on the road.”

Forming in 1981, Slayer were one of thrash metal’s torchbearers, forming The Big 4 alongside Metallica, Anthrax and Megadeth.

Slayer have confirmed the support bands for their North American tour are Anthrax, Lamb Of God, Behemoth and Testament. Dates have yet to be announced.

The story behind Disciple by Slayer