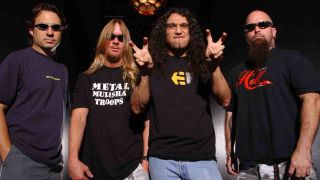 Following the release of Diabolus In Musica in the late 90s, nobody was really sure what to make of Slayer’s future. Was this it? Why was there a nu-metal groove? What is going on!? Luckily, that all changed in 2001 with the release of God Hates Us All, and its iconic track Disciple. It’s unrelenting in its brutality, jackhammering home the idea of blindly following faith without rhyme or reason. And it’s brilliant. But where did this rekindled bloodlust come from? We sit down with Kerry King to find out.

It Woke Me Up

“I’ve said it a whole bunch of times before, but I just wasn’t really present on the previous record (1998’s Diabolus In Musica) because of how I felt about what was going on in heavy music at the time. That whole Limp Bizkit and… I can’t even think of the other ones anymore… but all of that had just got me really bored and uninspired. So I felt like I had to be me again or just stop, and I think Disciple was a big step to rediscovering that, you know? We’re doing it our way or no way at all!”

“Obviously the line ‘God hates us all’ was a big thing for the song. It’s such a brutal sentiment and fit perfectly for us. But it’s a pretty unique song for Slayer, in that we don’t really usually have these big chant-along moments. That’s not really the type of thing that we trade on. But I know people like to be stood in a festival environment and have that hook, and that groove, and Disciple has both of those things. That, along with this really grinding outro, set it apart from the rest of our back catalogue.”

It Came To Me In A Traffic Jam

“I remember being gridlocked in LA, where the traffic is terrible, getting angrier and more frustrated and looking up at this big billboard that said, ‘God loves you all.’ and I remember thinking, ‘What? he sure as hell doesn’t love me right now!’ and it stuck with me. I already had the ‘I never said I wanted to be God’s disciple’ line, but I didn’t know it was going to link up with the ‘God hates us all’ lyric initially. They just fit together so well, though, that I knew I had to.”

Tom Made It A Classic

“When I write a song, I hear how I want it in my head, but I never get to actually hear whether it’s a great song or not until Tom adds his vocals to it. Ultimately, when I see Tom in the vocal booth is the first time I actually get to hear it, and I remember hearing him sing that line and a big smile just broke out across my face like, ‘That is exactly what I wanted to hear!’”

It’s Back In The Setlist To Stay

“I think we have to play it these days. It’s become like a South Of Heaven or a Dead Skin Mask or an Angel Of Death – people have begun to expect it. I actually took it out of the set for a while, because we now have so much material that we want to play it’s hard to get it all in, and then when we reintroduced it I remembered how much of a response it got. So I think it’s in there for good now.”