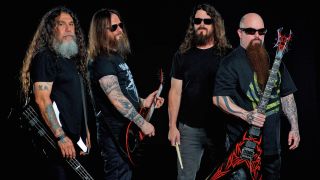 Slayer fans can look forward to hearing the follow-up album to 2015’s Repentless next year, says guitarist Kerry King – although he won’t commit to a deadline.

He’s previously said that a lot of the record had been written around the same time that the Repentless material was prepared, and only about half a record’s worth is still needed.

But despite having already predicted that the thrash icons’ 13th title would arrive in 2018, he still won’t say for certain when it can be expected.

King tells Full Metal Jackie (via Blabbermouth): “It depends on touring. Getting time to rehearse, getting time to make up new stuff. We haven’t done Australia on this run yet. We’re hitting Japan finally, late this year.

“If things go well I’d like to record next year – but timelines change all the time.”

When the time does come, he’s looking forward to avoiding the “incredibly daunting” experience he had with Repentless. “We do have six to eight songs, for sure,” he says.

“So all I really got to do is write, I don’t know, maybe four or five more songs, and get a whole bunch of lyrics together.

“Half the work is done, so in my book, that’s exciting. Repentless was an incredibly daunting effort – this one should be a lot more laid back.”

The 2015 release was their first without late guitarist Jeff Hanneman, with Exodus man Gary Holt taking his place. Holt has previously discussed the possibility of writing songs for Slayer, while King has said it’s something he’d consider.

The band’s next run of tour dates is yet to be announced.