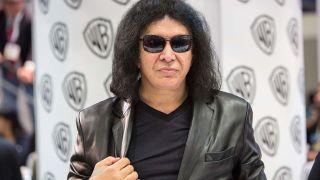 Gene Simmons says he liked the Beatles as a teenager because his mother didn’t approve of their looks.

Simmons tells Bass Guitar Magazine: “I remember thinking, ‘They look weird.’ They were very small people by American standards, and they looked feminine. They didn’t look Italian or Jewish or Greek or black. They didn’t even look like hoodlums.

“I started to think they were cool because my mother thought they looked silly. They looked like what they sounded like.”

The Beatles’ 1964 debut on The Ed Sullivan Show turned out to be a defining experience for Simmons, who recounted the event in his 2001 book Kiss And Make-Up.

He wrote: “My first thoughts about pop music were born that night, and they were simple thoughts: If I go and start a band, maybe the girls will scream for me.”

Kiss recently released Don’t Touch My Ascot a track from the Scooby Doo & Kiss: Rock And Roll Mystery soundtrack – a film which also features the band.

Simmons and Paul Stanley appear to be at odds over the release of a new Kiss album, with Stanley saying the group are too busy and the bassist insisting the band will enter the studio in 2016.

Simmons says he’s already written at least one track for the follow-up to 2012’s Monster.