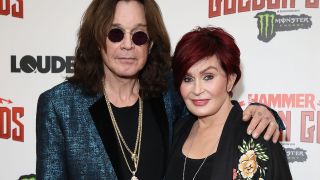 Earlier this week it emerged that Ozzy Osbourne had postponed his UK and European tour for a second time as he continues to recuperate after surgery.

The dates had been due to take place throughout January, February and March 2020 and had been set up after he had to shelve his 2019 touring plans as a result of falling at home earlier this year.

The accident saw the vocalist injuring his back, neck and shoulders – dislodging the metal rods he had inserted following his 2003 ATV accident.

Ozzy issued a video message to say he couldn’t wait to get going again, but asked fans for their patience while he gets back to full fitness.

Now his wife and manager Sharon Osbourne has spoken about how the call-off is affecting the former Black Sabbath icon.

Speaking on US TV show The Talk, Sharon said: “We were watching something the other day about a band on the road, and it showed them all traveling on the tour bus.

“He’s just can’t wait to get the OK from the doctor to let him go.”

Judas Priest, who were lined up to support Ozzy on the UK and European dates have also issued a statement in light of recent events.

The band said: “We are very grateful for the rock solid support from our wonderful UK and European fans as Ozzy gets well and strong.

“The UK and European tour will showcase the very best British metal from the ones that started it all, and we proudly look forward to celebrating our 50 heavy metal years together with you!

“As soon as the dates are rescheduled we will let everyone know.”

Ozzy will release the See You On The Other Side limited edition package on November 29 through Sony Legacy, which will bring together his solo catalogue along with a host of extras.