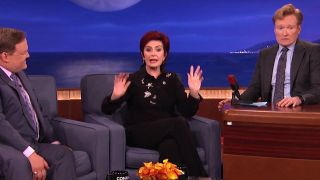 Sharon Osbourne says her marriage with Black Sabbath vocalist Ozzy is back on track after his affair.

She discovered his four-year “double life” after hiring a private detective to find out where he’d been spending so much money. They broke up in May this year.

Ozzy later admitted that he was suffering from sex addiction, that he was seeing a psychologist regularly, and issued a public apology to all those he’d hurt.

“It’s tough for somebody who suffers with that.”

Asked about how they talked out their differences, she replied: “It wasn’t as easy as that. But it we worked it out – after I got him glasses. I said, ‘My God, you do need glasses! Who would do that with that?’

She’s previously said her husband was a “dirty dog” who’d “pay big time” for his behaviour. Now she adds: “He has to go ‘downstairs’ for three hours every day. You say you like sex? Down there!”

Black Sabbath complete their The End farewell tour in their home city of Birmingham, UK, on February 4.

Ozzy Osbourne: I wish I was a hero to myself