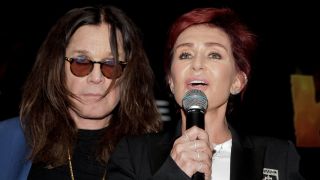 The Black Sabbath icon recently told Good Morning America that he and Sharon were “back on track,” adding: “Some days you just drift apart for a while, but you get back on the horse.”

But Sharon addresses Ozzy’s comments on her own show The Talk, saying: “Um, ‘Get back on the horse,’ how dare you? He’s such a romantic fool. So romantic, ‘Back on.’

“It’s been very hard. I shouldn’t speak for him, but I know he wants to come on the show anyway and talk for himself to you all. He does. And I’m fine with that. He feels that he owes everybody here an apology, because he’s put us all through it.”

“He’s very embarrassed and ashamed about his conduct. And through his shame and embarrassment, you know, he finds it hard to actually get it out.

“But with you guys, I think he’ll be much better. It will be easier for him to speak.”

She continues: “I can’t speak for him, but for me? Yes, I forgive. It’s gonna take a long time to trust, but, we’ve been together 36 years, 34 of marriage, and it’s more than half of my life. And I just can’t think of my life without him.

The Gospel According To Ozzy Osbourne