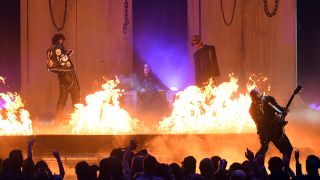 Ozzy took to the stage with Post Malone, Travis Scott and Andrew Watt for the track Take What You Want in Los Angeles, with their performance punctuated with flames and pyro – something which Sharon admits worried her.

Speaking on The Talk she said (via Blabbermouth): “Obviously, it's the American Music Awards, so it's all pop music and pretty little girls coming on one after the other with their little dances.

“Then suddenly there's a lot of guys up there – and they nailed it. There was more pyro than I've ever seen. And then I'm like, 'Oh god, Ozzy. Please don't move. Everything has happened to you except being set on fire. Please don't move!’

“You know what? To be able to get up with Post and Travis Scott, it was just amazing.”

Last week, Ozzy released his brand new single Straight To Hell featuring Guns N’ Roses guitarist Slash. The track, along with Under The Graveyard, will feature on the vocalist’s upcoming studio album Ordinary Man, which is set to launch in January on a date still to be confirmed.

Ozzy's postponed 2019 tour dates have been rescheduled for 2020, while an official video for Straight To Hell will be released soon.