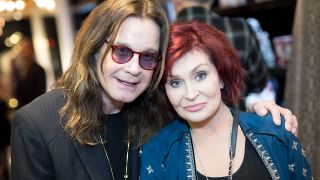 Sharon Osbourne has hit back at tabloid rumours regarding Ozzy’s health.

The vocalist was hospitalised earlier this year with pneumonia and, as he was recovering, he fell at home, injuring his back, neck and shoulders – dislodging the metal rods he had inserted following his 2003 ATV accident in the process.

As a result, Ozzy was forced to postpone his entire 2019 touring schedule and push the live shows back to 2020.

Yahoo! Entertainment report that Radar Online suggested that Ozzy was on “a crazy train to an early death” while the website says the National Enquirer reported that the singer could “be dead by Christmas.”

Those headlines sparked an angry reaction from Sharon on The Talk TV show in the US on Thursday, with Ozzy’s wife and manager saying: “I'm not lost for words a lot, as you all know, but why do people just say this was true?

“How cold and callous are those headlines? Where's people's empathy? It's not true, by any stretch of the imagination.

“I’ve been open with everyone and so has Ozzy. He had a terrible, terrible bout of bad luck with his health, one thing after another. And then after his fall that he had, it's been awful for him.

“But he's getting better. He's recuperating. Why be like, 'He's on a crazy train…’ How disrespectful to anyone. Ozzy ain't going nowhere.”

Last month, Ozzy said his recent collaboration with Post Malone was the catalyst for his upcoming solo album, which the former Black Sabbath icon recorded in just four weeks.

He said: “I’ve made a new album and it’s helped get me back on track. I was just lying in my own self-pity for months. It’s the greatest album I’ve done.”

Ozzy will release the mammoth See You On The Other Side limited edition package on November 29 through Sony Legacy, which will bring together his solo catalogue along with a host of extras.

He’ll then head out on the road across the UK and Europe from the end of January with special guests Judas Priest on his rescheduled No More Tours 2 shows.