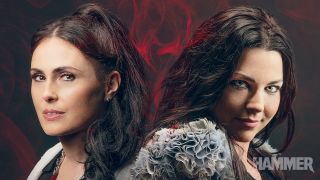 Within Temptation’s Sharon den Adel and Evanescence’s Amy Lee are the cover stars of the new issue of Metal Hammer magazine.

In an exclusive interview, the vocalists chat about their careers ahead of their upcoming co-headline European tour, which will take place throughout April next year.

The pair also touch on the subject of sexism within the music industry – and, when asked if they’d ever faced pressure to “sex things up” to progress their careers, Lee replies: “I never did what I didn’t want to do.

"I’m proud of that, but there’s always those times when they’re telling you, ‘Hey, this is just how it works. People are going to focus on this, you need to lose 30 pounds.’

“It's truly your choice whether you follow that advice or leave it. The only thing it ever did to me is make me a little insecure, especially being 21 years old.

“The ultimate decision was, ‘I’m not going to do that.’ It was always, ‘I’m going to be who I’m going to be.’ We were talking before about being inspired by bands who are unique, and that was more important to me than having a huge success.

“Thankfully we also got to have a success and that’s partially, I like to think, something that set us apart was because we weren’t doing what every other girl in the industry was doing.”

Den Adel, who has a bachelor’s degree in fashion management and has worked as a stylist and designer, says she had clear ideas about what she wanted to wear onstage and adds: “When I entered the band, I wanted to wear these big dresses and the record label was like, ‘Could you not be a bit more sexy?’

“I thought, ‘No, this is who I am and I feel very comfortable in it.’ It also underlined the music we were making which was big and epic and orchestral. It suited the music.”

Lee was often labelled a ‘diva’ when the band were making their mark on the metal scene, and when asked if she thought that was unfair, the Evanescence singer replies: “Definitely. I think that has to do with the people I had around me and they were all men.

“When you’re represented by a lot of older men who want you to do what they want you to do and not have an opinion of your own, of course they’re going to say you’re a bitch when you don’t do it.”

The full interview can be found in the new issue of Metal Hammer magazine, which is on sale now. The latest edition also comes with an Evanescence laptop sticker, a Within Temptation art card and Within Temptation posters.

Find out everything you need to know about the new issue.