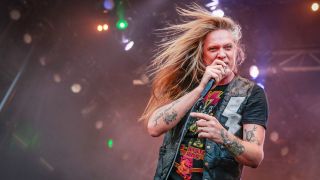 The former frontman reported earlier this year that he wanted to “bury the 20-year hatchet” with his former colleagues, though the band have repeatedly shouted down the idea – even declining $500,000 for two reunion shows. Now Bach says his current manager Rick Sales is discussing the idea with Skid Row’s earlier manager Doc McGhee.

He tells Eddie Trunk (via Blabbermouth): “All I can say is that Rick is talking to Doc. That’s all I can say. That is what is happening, and I don’t have anything else to tell you.

“All I can tell you is we’re not getting any younger, folks. Let’s put the hair band back together while we’ve got hair.”

Theart performed with them for the first time earlier this year after TNT ex Tony Harnell unexpectedly quit after just eight months on board. He’d been drafted in after Skid Row fired Johnny Solinger in 2015.

It’s not clear as of yet whether Theart has been made a permanent member of the band – though guitarist Dave ‘Snake’ Sabo stopped short of calling him the band’s official frontman in October.

He told News-Press: “We haven’t even discussed it yet. We just said, ‘This feels really good and let’s just do it.’ It’s who we are right now.”

Bach recently released his memoir 18 and Life On Skid Row. The book recalls his many rock’n’roll exploits, including his bitter feud with Bon Jovi and the singer’s father and the night he took Quaaludes with Duff McKagan at the Rainbow Bar & Grill while Metallica’s Lars Ulrich danced around them.

How Skid Row and Sebastian Bach Went To War