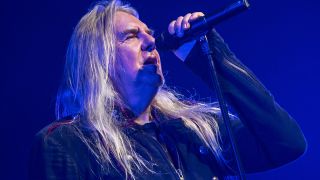 Saxon frontman Biff Byford has checked in to give fans an update on his health after his recent heart surgery.

The band were forced to postpone the remaining dates on their 40th anniversary Castles & Eagles tour as a result of the operation which took place at the end of September, but Biff says he’s getting better every day – and revealed that work has begun on what will be Saxon’s 23rd studio album.

The vocalist says: “I want to thank everybody for all your great messages – they’ve cheered me up. I’m feeling OK. I’m really sore from the operation and breathing is still a bit dodgy sometimes, but apart from that I’m getting better and better every day.”

As for the follow-up to 2018’s Thunderbolt, Biff says: “Nigel Glockler has started drums this week in Germany. Next week, Paul Quinn and Doug Scarratt start the guitars and the plan is for me to start doing vocals around January/February, and that will help me get into shape for the shows coming up.”

He adds: “I’ve got some solo album news coming soon – it’s finished, but I’ll not tell you about that today.

“So everything is great and once again thank you for all the messages and thanks to the NHS for being brilliant and getting me to the experts in time.”

“We decided we had to play a show for all our fans in Scotland and the Barrowland stepped up with clearing the date we needed.

“Unfortunately due to the Barrowland’s size restrictions we cannot put the Castles & Eagles production in and hope you all understand, but we will try to make this as special a show for you as possible.”

Girlschool will join Saxon as special guests on the new dates which can be found below.