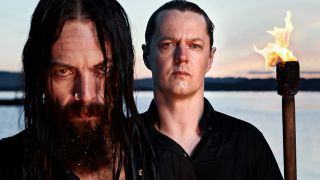 Satyricon have announced that they’ll release their ninth studio album later this year.

Titled Deep calleth upon Deep, it will arrive on September 22 via Napalm Records and it was recorded in Oslo and Vancouver earlier this year.

Mixing was handled by Mike Fraser who previously worked on Satyricon’s 2006 album Now, Diabolical and is said to be a “wholesale reinvention and a brand new era” in the band’s history.

Satyricon frontman Satyr says: “Approaching this release, what I always kept in mind is that either this is the beginning of something new or it’s gonna be my last record. If this is going to be the last, then it needs to be something special.

“If there are more records then I’d better make sure that this is so different from the last one that it feels like a new beginning. I think it’s really, really dark, very spiritual and filled with confidence and energy.”

Satyr adds: “The way that I see it is that for any art, in order for you to be able to inhale and completely understand it, it will take a little bit of you as well. If you get it all after a couple of listens, you know that it probably won’t stay with you. So the title is saying, ‘From the depth of the people making this record to the depth of the listener…’

“If you want to take part in this journey, you should be prepared to dig deep down in the darkest corner of your soul with us.”

Pre-orders for Deep calleth upon Deep will go live in August. While the band have yet to reveal the final tracklist for the album, the cover art can be seen below.

In addition, Satyricon have announced a one-off show at London’s Heaven on September 29, with tickets now on sale via See Tickets.

My Life Story: Satyr from Satyricon