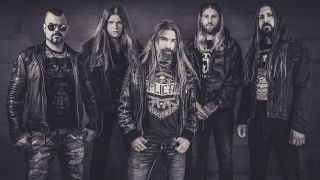 The follow-up to 2016’s The Last Stand will be released on July 19 through Nuclear Blast, with the band recently telling Metal Hammer they’d like to play special gig on the Normandy beaches on the anniversary of D-Day at some point in the future.

In the new clip, Sabaton can be seen discussing how they created the record, with frontman Joakim Brodén saying: “The most important thing for us is that we have good songs and good stories and that they speak the same emotional language.

“When we start writing songs and it starts to crystallise about which theme and military conflict we’re dealing with, that’s when a lot of the production decisions are made from an instrumentation and arrangement point of view, along with the twists and turns of how would you compose the song.”

Sabaton are currently on tour across Europe – a run that will include a headline set at the UK's Bloodstock Open Air next month. They also recently announced they’d tour across Europe with Apocalyptica and Amaranthe early next year.

Bassist Pär Sundstöm said: "You know by now how much we care about the bands we choose to bring with us on tour, this is no exception. Amaranthe are a rising star on the metal sky bringing such energy and passion rarely seen on stage and will open the evening.

“After that comes the big surprise for a lot of people who are not familiar with the cello rock band Apocalyptica, but trust us that their emotional show will definitively create magic in the arenas.”

He added: “Finally, what we are bringing, except for our biggest touring production ever, is a promise to deliver a show you never could imagine and the biggest announcement regarding this tour is still to come.”

Sabaton are the cover stars of the latest issue of Metal Hammer magazine, which is on sale now.

Sabaton: The Great War
Sabaton will release their new album The Great War this summer. The band began recording the follow-up to 2016's The Last Stand exactly 100 years after the end of World War One.View Deal