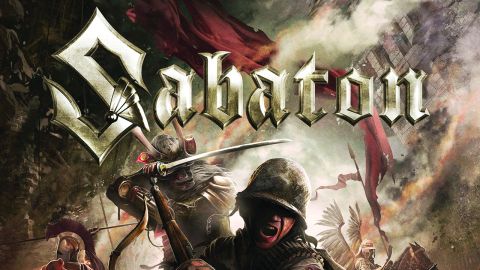 It’s telling that the biog for Sabaton’s latest album focuses on the Swedes’ live status rather than the musical merits of their latest offering.

Granted, they are shit-hot when it comes to performing onstage, but on record there’s a sense that they are rehashing old ideas and surviving on the ‘novelty’ of being a theme band. While albums like The Art Of War and Primo Victoria made their mark with epic, choir-laden choruses, big solos and loads of chuggy power metal, The Last Stand doesn’t quite hit said mark.

That’s not to say it doesn’t deliver the core elements of Sabaton; Joakim Brodén’s gruff resonance is still the perfect accompaniment to their heroic canter and elements like bagpipes and Hammond bring a new flavour to their repertoire. Opener Sparta’s unifying cry is designed to make the crowd sing along, while Peter Tägtgren has once again added a beefy sheen to the production. The pace is fast, the lyrics are victorious and glowing moments like the catchy Shiroyama cement the enduring likeability of this band. And yet the reliance on predictable melodies along with the lack of atmosphere-building keys suggest that, having lost four longstanding members in 2012, Sabaton are still consolidating rather than forging new conquests.