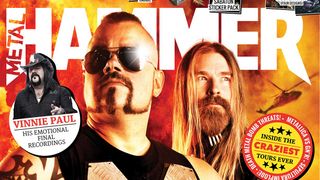 The new issue of Metal Hammer is a Sabaton spectacular, featuring an exclusive cover interview, a free sticker pack and a free collectable Sabaton tank!

It's available instore and to buy online now.

We head to Sabaton’s biggest gig ever to find out how the Swedes went from novelty outsiders to one of the biggest bands in metal, and get the story behind their colossal new album, The Great War.

Here’s what’s else inside this month’s issue...

We find out about the emotional final recordings of Pantera legend Vinnie Paul, and the painful toll his sudden passing has taken on his HellYeah bandmates.

We take a look inside the stories behind Rammstein’s blockbuster latest album.

We delve into the fascinating and bizarre world of Heilung, the world’s favourite cult band.

And we find out how John Baizley has channelled his pain into one of the year’s most expansive albums – Baroness’s epic Gold & Grey.

And, in a special feature, we dissect the most infamous tours in metal history, starring Metallica, Guns N’ Roses, Sepultura, Slayer and more.

And how a haunted house saved Black Sabbath’s career.

And celebrate the legacy of Skid Row’s classic debut album.

And there’s brand new interviews with Motionless In White, Light The Torch, The Damned Things, My Dying Bride, Bokassa, Duff McKagan and many, many more.

Only in the new issue of Metal Hammer. On sale now! Find your nearest copy or buy it online.