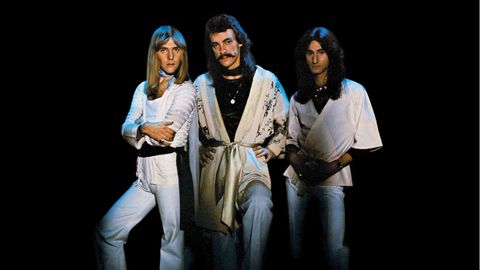 It seems inconceivable that Rush’s landmark album 2112 is now 40 years old. In fact its real age is a little over the four-decade mark, having originally been released on April 1, 1976. No fooling.

The future is a tricky beast to predict. When George Orwell’s 1984 was first published in the late 1940s, the year in which the novel is set must have seemed light years away. And while many of Orwell’s predictions came uncannily true (Newspeak, omnipresent government surveillance, etc), he failed to anticipate the popularity of Bananarama. Similarly, while Stanley Kubrick’s 2001 remains a stunning piece of cinema, the actual year itself offered precious little in the way of groundbreaking outer space exploration – the US was too busy invading Afghanistan.

Rush were lucky in setting 2112 so far into the future that only the Methuselahs among us will discover whether or not the Priests of the Temples of Syrinx ever assume control. (Not as lucky as Zager and Evans, mind you, but lucky all the same…)

To truly appreciate the brilliance of Rush’s 2112 – concept and title track combined – one must reflect on the zeitgeist of the 1970s, and specifically the year 1976. Rush had released three albums up to this point – a self-titled first album, Fly By Night and Caress Of Steel – but by and large, the band were still, to echo a track title from their aforementioned debut, finding their way. And ’76 was categorically not the best year in which to release a record such as 2112. Babylon was all set to burn, Rush’s hard-rock sci-fi shtick was widely regarded as out of place and out of time, and their promo photos – three gawky, long-haired Canadians wearing satin kimonos – didn’t help their cause one iota.

As spring ’76 turned into summer ’76, Britain began to wilt and wither under a relentless heatwave, daytime temperatures regularly exceeding 90 degrees Fahrenheit in old money. The fields and meadows became more parched than Paul Gascoigne after a month in rehab. The walls of the offices of Sounds music weekly, where this writer worked, dripped with sweat and deadline desperation. We still had typewriters and Bakelite telephones. Still, we opened the windows, gasped at a non-existent breeze, stripped to our underpants and carried on in the face of adversity.

Despite this hostile environment, Rush stuck their heads above the sun-scorched parapet. News of 2112’s excellence spread by word of mouth more than anything else, and when the band toured the UK for the first time in ’77 – at the height of punk, no less – an army of pale-faced rock fans emerged from the shadows to greet them like conquering heroes.

Listening to 2112 today, one is struck by both its brilliance and its brevity. The main concept suite, which occupied side one of the original vinyl record, lasts a shade over 20 minutes. The five songs on the flip-side (as was) are all around the three- or four-minute mark. But sometimes less is more, and the title track – which of course details the failed struggle of a lone man to bring the joys of music back to a dystopian world – remains an awesome piece of work.

It’s comfortingly familiar too. Even if you haven’t heard 2112 for years, you’ll recognise immediately every last Alex Lifeson power chord, every last shrill Geddy Lee warble, every last Neil Peart pitter-patter drum pattern. There’s an endearing naivety to the piece too – this was no work of premeditation, just an honest outpouring of fantastical thoughts. And for this writer, immersed as I was in Moorcock and Marvel Comics back in ’76, 2112 was very much the right record at the right time.

The best part of the 2112 story has always been when the central character discovers an abandoned guitar (‘What can this strange device be?’) and learns slowly how to master its six sonorous strings. Lifeson’s initial gentle tentativeness is genuinely evocative, and when he finally gains the confidence to let rip it’s no exaggeration to describe the moment as life-affirming.

Conversely, the passage of time hasn’t been particularly kind to the remaining tracks on the album. A Passage To Bangkok is, to put it bluntly, a jaunty pop song about an interesting train ride; The Twilight Zone has delightful chiming Thin Lizzy guitars but is so low-key it’s almost throwaway; Lessons could by a CSN&Y demo; Tears is reminiscent of a saccharine Moody Blues lullaby. Thank God, then, for storming closing track Something For Nothing, which almost sounds like a leftover from Rush’s Zeppelin-esque first album. With a running time of just 3.59, Something is much too short, however, and fades inexplicably early.

So to the bonus tracks on this 40th-anniversary release – and a right mixed bag they are too. Solar Federation isolates the spoken voice-over at the all-conquering climax of 2112: ‘Attention all planets of the Solar Federation: we have assumed control.’ Er, that’s it. Dave Grohl, Taylor Hawkins and Nick Raskulinecz fail to get to grips with the Overture movement of the 2112 opus – the ‘headbanging bit’ (Rush fans will get it) goes spectacularly pear-shaped, and Grohl’s insensitive bish-bashing makes one hanker for the niceties of Peart’s drumming technique. Billy Talent’s Passage To Bangkok is musically faithful but ruined by unnecessarily aggressive vocals. Steven Wilson delivers a sensitive The Twilight Zone, but there’s a baffling duet with a Dalek on the chorus. Alice In Chains, bizarrely, treat Tears like an Andrew Lloyd Webber show tune.

Still, Canadian singer-songwriter Jacob Moon’s gruff yet tremulous vocals are the highlight of his version of Something For Nothing, and Lifeson’s signature guitar tone is replicated with remarkable accuracy. But this is hardly an all-star cast and is unlikely to appeal to hard-core Rush fans. Where are Max Webster, Triumph and Frank Marino when you need them? It all feels a bit flat.

Aside from the cover versions, we have two excellent live out-takes from a 1976 Rush concert at Toronto’s Massey Hall: 2112 itself, truncated to 15.47 but still sounding vital and vibrant, plus a sparkling rendition of Something For Nothing. But then the barrel bottom is well and truly scraped with an appalling live recording of The Twilight Zone, a song Rush have only ever performed in concert twice. Putting the boot into bootleg, this should never have left the Memorex C90 from which it likely originated.

Finally, there’s an archive US radio advertisement, an unenthusiastic voice informing the listener: “2112 is a concept of life in the future, conceived and performed by Rush on Mercury Records and tapes.” So thanks for that.

Beside the audio, 2112 – 40th comes in a multitude of shapes and sizes, including a three-LP 200-gram vinyl edition with a Starman turntable mat, Hugh Syme’s original Starman pencil sketching, three button badges featuring each band member, and a whole lot more besides, all housed in a box lined with velvet flocking. It all sounds very exotic, but not half as exotic as 2112 sounded back in 1976.