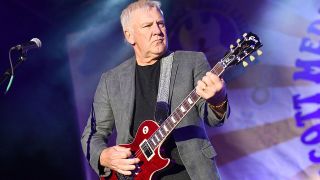 Rush’s Alex Lifeson says he hasn’t felt inspired or motivated to play guitar since the death of drummer Neil Peart.

Peart died on January 7 after a three and a half year battle with brain cancer, with Lifeson saying that it’s been difficult for him to pick up an instrument – although he says, “I know it'll come back.”

Lifeson was a guest on Talking Golf With Ann Liguori on WFAN to talk about his love of the sport, when he was also asked if he and Rush vocalist, bassist and keyboardist Geddy Lee had talked about getting back on stage together.

“It was the same when his daughter died in a car accident in 1997. I didn't really play for about a year. I just don't feel it in my heart right now. Every time I pick up a guitar, I just aimlessly mess around with it and put it down after 10 minutes.

"Normally, I would pick up a guitar and I would play for a couple of hours without even being aware that I'm spending that much time. So I know it'll come back.”

Lifeson points to Lee’s 2019 book tour promoting his Big Beautiful Book Of Bass and adds: “Every time I spoke to him about getting back together, he was, like, 'Yeah, when I get through this.' And then something always comes up.

“I don't know if the motivation is there for us to really do anything now. We're certainly proud of our track record, and we still love music. But it's different now."

Rush brought the curtain down on their career when they played their final show in Los Angeles on August 1, 2015 – but Lifeson says he doesn’t miss the touring lifestyle.

“Maybe a year or two after we stopped, I probably missed it more,” he says. “But I've settled into it now, and I quite like my life and what I'm doing. I keep active in music, and I'm so in love with golf during the summer, and I'm close to my family. It's a very good balance for me.”

Rush and Permanent Waves featured on the cover of issue 274 of Classic Rock magazine which is still available to buy. The lead article spans nine pages and includes an interview with Alex Lifeson along with comments from Geddy Lee, Terry Brown and art director Hugh Syme about the band’s seventh studio album.

Rush: Permanent Waves Super Deluxe Edition
Rush's pivotal 1980 album Permanent Waves has been reissued in this lavish package to celebrate its 40th anniversary. It features a remaster of the original album, live cuts and much more.View Deal