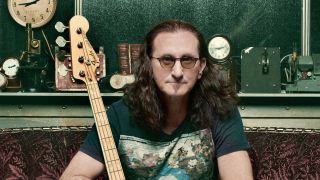 Geddy Lee has written a book. And despite the Rush man's long history of packed arena shows, and all those 'Best Bassist' prizes from a never-ending run of end-of-year polls, the The Big Beautiful Book Of Bass isn't something that shares what he's learned over the decades. Quite the opposite, in fact.

"I suddenly realised that I really knew nothing about the instrument I'd held in my hand for over 40 years," says Geddy. "About its evolution, about its birth, and about what other luthiers and guitar manufacturers were doing around the globe at the same time."

So Geddy Lee sat down and learned about his own craft, and fed this new-found enthusiasm into the book, which explores the history of the instrument and includes interviews with the likes of John Paul Jones, Adam Clayton, Robert Trujillo, Bill Wyman, Les Claypool and Bob Daisley.

Like all good authors keen to promote their work, Lee arrives in Europe for a short book tour this weekend, taking in stops in London, Manchester, Glasgow, Amsterdam and Hamburg. For ticket information, visit the Rush website.

What made you want to study something you've been playing your whole life?

"I'm a collector by nature and a man of many passions. I'm a bit of an extreme character in that regard: when something catches my interest, I have to get to know it in a total sense, and I'm a bit of a completist when it comes to the things I collect.

"I guess it was around 2012 when I was in rehearsal for the previous tour that I got an offer of a swap of a vintage bass guitar from 1953 – a Fender – in exchange for a little bit of Rush gear. And I thought, why would I do that? I'm not really interested in old instruments. I have my own few instruments that give me the sound I need.

"But of course I started looking into what Fender doing in 1953, then the story of Leo Fender, and the development of the Precision bass – the first commercially available electric bass guitar. What was that all about?

"So the story suddenly became very fascinating to me, and once that starts to happen, and you combine that with the collector's mentality, and bingo! That's called Falling Down The Rabbit Hole. So that's pretty much what happened to me."

What was the most surprising thing you learned?

"More than I can say. I certainly learned a lot about instrument manufacture! There were bass players all around the world in jazz bands or skiffle bands, schlepping these giant double basses around, tying them to car roofs. They were second-class citizens in a way, because it was such a deal to get a double bass to a venue.

"Then along comes this bass that Leo Fender develops: the Precision bass. It not only has portability, but it actually has frets – hence the word 'precision' – where you can actually get a tuning that's precise.

"So it was a revolution! It changed a lot of things, and of course there was resistance to it at first. People were skeptical, but there must have been one kind of bass player that was going, 'Oh my god! This is going to change my life! I'm going to be able to plug this in control the volume! And play in tune!' It had so many advantages."

"It took a bit of getting used to. My co-writer on this project is a fella named Daniel Richler. We've been friends for a long time, and he comes from a very literate family – his dad Mordecai Richler is a very respected literary figure here in Canada – and he's a novelist and a broadcaster.

"He's interviewed so many people, so he was a fantastic companion for me on this journey. He helped me wrestle with words, and helped me find my voice as a writer. At the same time, when we'd go into an interview, he would be able to prep me and help me get my mind into the right, relaxed state of mind to get the people I was interviewing to spill the beans.

"The first one I did was with Bill Wyman. He's quite a character and a very funny man. He's a very interesting guy because he has a myriad of interests. He's a photographer, and a amateur archaeologist, and a football fan, so he wants to talk about anything but basses.

"It was quite a challenge for me to keep bringing it back to the subject. But he's a lovely guy, and we had a great time together, and that set the tone. I found the whole process really enjoyable, especially how revealing their stories were. Getting to know these guys from a different perspective was a really interesting trip."

Who is the book for? Do you have like a reader in mind?

"Initially it was a book for guitar lovers: lovers of vintage instruments. There are a lot of great, beautiful books on vintage guitars, but I felt there wasn't one real companion for the electric bass collector of the electric bass lover.

"So if you wanted to know about what Gibson was doing in the middle 60s in terms of their various models of electric basses, you had to buy a Gibson book and then go searching for the few words that were peppered around about their basses. because you know, it's more about guitars. There was a real hole in the world of reference books about the electric bass guitar, so I tried to fill that hole.

"Once I got more into it, the stories were very rich and revealing, and I included stories about the instruments I used throughout my own career because there's a hungry audience of Rush fans out there.

"And that's how the whole project developed. It got bigger and bigger, and with me being a guy who doesn't think small, I ended up with a Big, Beautiful Book."

Is there any particular bass in your collection you prize above all the rest?

"There are quite a few! I love the pre-CBS jazz basses, especially jazz basses from 1962. The 1963 Fender Precision basses are a particular favourite of mine, and I have this one 1959 Precision bass that is really quite special to me.

"But also I discovered a love for Gibson Thunderbirds, which are an instrument I avoided my whole career, because they were so different from the sound I was trying to develop for myself. And so as a member of Rush, I stayed away from anything that didn't fit into my idea of my sound, but when I started searching for these rare beasts and getting to play them and prepare them, I really got into what they have to offer.

"I really had a lot of fun doing it, which is why I took about 27 instruments with me on the last Rush tour and played all these various beasts, much to the surprise of our audience."

And to the delight of your guitar tech

[laughs] "Well, it kept him hopping, that's for sure."

Are there any basses out there you can't get hold of?

"I've found a few since the book was published. Now people are coming to me with their instruments because they know I'm such a nut. It's always the way, right? You send a book off the printer, and you find the Holy Grail you've been looking for for 10 years."

"I don't think so. I think this works because of I've spent my life with one of these instruments in my hands. So I come to it with a serious level of experience and also a track record.

Are there any other projects you're working on?

"I have a film I've been trying to get made for quite a while. It's a film about baseball set in Italy. It's an independent film we've been working on for a number of years, and we've had a few problems getting it off the ground. But I'm not giving up on that!"