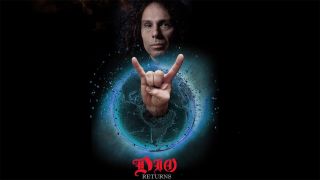 In November last year, it was revealed that the Ronnie James Dio hologram tour would head back out on the road for more than 100 shows.

While no firm dates have been revealed, the company behind the live shows, Eyellusion, have released a new trailer showing the late rock icon, stating that it'll begin on June 1.

Speaking with Billboard about the Dio Returns shows, Eyellusion’s CEO Jeff Pezzuti said: “The big question when we first toured Dio through Europe was, ’Is anyone actually going to show up?’

“We sold out the last three shows in Europe and we did really well. We're such believers in what we were doing and we're all such massive fans.

“In my sixth grade class picture, I'm wearing a Dio shirt, so you can imagine taking this all the way across the finish line has been a dream come true.”

Ronnie’s widow Wendy is a partner of Eyellusion, along with Ahmet Zappa, who is behind the Frank Zappa hologram tours.

The Dio hologram made its debut at Wacken Open Air back in 2016.