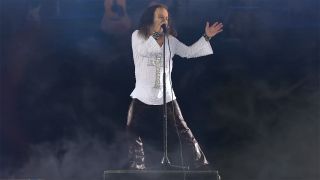 More than 100 Ronnie James Dio hologram shows are planned throughout 2019, while the previously reported Frank Zappa tour is also currently being set up.

The news comes after Eyellusion – the hologram company behind the live shows – signed a deal with the Agency For The Performing Arts.

Eyellusion created a hologram of Dio and it made its debut at Wacken Open Air in 2016.

Since then, the hologram and live band Dio Returns have toured across the US and Europe – and Billboard report that there’s more to come.

Both Wendy Dio and Ahmet Zappa are partners of Eyellusion, along with Jeff Pezzuti, who says: “The big question when we first toured Dio through Europe was, ’Is anyone actually going to show up?’

“We sold out the last three shows in Europe and we did really well. We're such believers in what we were doing and we're all such massive fans.

“In my sixth grade class picture, I'm wearing a Dio shirt, so you can imagine taking this all the way across the finish line has been a dream come true.”

Dio Returns is due to head back out on the road from April next year, while the final pieces for the Frank Zappa hologram tour are also being put in place for 2019.

Pezzuti adds: “The Zappa show is going to set the bar for everything and totally blow everything else out of the water.

“It is the most incredible visual show that's ever been assembled and every song has a different look and feel. It's going to be an absolute mind fuck, in a good way.”

The hologram tours have split opinion, with former Dio guitarist Doug Aldrich reporting earlier this year that Ronnie “would be pissed” about it, while Zappa's son Dweezil distanced himself from the proposed shows.