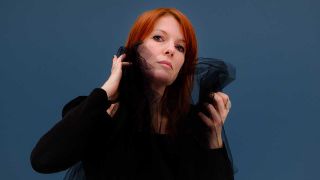 Fresh from an appearance at this year's Summer's End Festival, RISE will release her new album Strangers this Friday October 18 on her own Wise Queen Records.

The new album features a guest appearance from former Fields Of The Nephilim guitarist Peter Yates and has been self-produced.

“David Gray once wrote a line that has stuck with me - “and when we meet again, we will be strangers”," RISE (formerly Talitha Rise) tells Prog. "That, in‌ ‌a‌ ‌nutshell, is the idea behind this album. This album traverses the challenge of the personal ‘abyss’ and the emergence from the bleakness of loss and separation. This gives way to hope, wisdom and the taking of responsibility.

"Each location adds another layer of meaning and context to the stories within each song. I wanted these songs to be a conversation with the land, the place, the history that I was in at the time but it is intertwined with some of my own intense personal experiences."

RISE has previously premiered the track Dark Cloud with Prog, which can be seen here.

Strangers can be pre-ordered here.