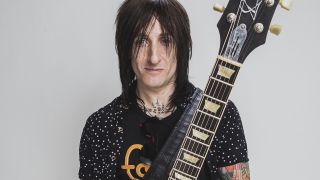 In December, Guns N’ Roses guitarist Richard Fortus reported that a new album could be with us in the near future and said that a single from the band could arrive before the end of 2019.

Now, in an interview with the St Louis Post-Dispatch, Fortus has given an update of what’s happening within the GNR camp.

He says (via Loudwire): “Slash is on tour right now. Once he gets back from that, we’re going to get some more recording done and hopefully get an album out soon – and then we’ll get back to touring.”

Slash featuring Myles Kennedy And The Conspirators are currently on the road across Europe in support of their latest album Living The Dream, with those dates due to conclude in mid-March.

They won’t tour again until May, with further dates scheduled throughout the summer – leaving a seven-week window for Slash to join the recording sessions.

Speaking with Classic Rock in August last year about the possibility of a new Guns N’ Roses album, Slash said: “I think everybody thinks it’s a good idea, and everybody would like to do it.

"There’s no shortage of ideas from everybody involved, but we’ve been so busy on the road there hasn’t really been time to go in and sit down and go, ‘Okay, we’re going to make a record.’”