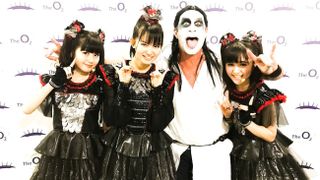 The Japanese trio supported Red Hot Chili Peppers on their UK tour and at lats night’s (December 18) gig at the O2 Arena, Smith performed a drum solo as part of Babymetal’s set.

After a performance of Gimme Chocolate, Babymetal exited the stage and the arena was plunged into darkness – which was when Smith slipped unnoticed onto the stage and behind the kit, replacing Hideki Aoyama and performing a solo disguised as a member of the Kami Band wearing corpse paint and white clothing.

Babymetal then closed their set with Smith playing on their Judas Priest medley of Painkiller and Breaking The Law.

Then at the very end of Babymetal’s set, Smith reappeared with a birthday cake for Su-Metal, who turns 19 on December 20 – with the audience singing Happy Birthday.

Babymetal were recently confirmed as support for Metallica on their upcoming show in Seoul, South Korea, on January 11. They will also guest with Guns N’ Roses on their five Japanese dates in January.