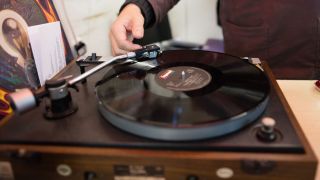 Nearly half of the UK’s vinyl buyers never play the records they’ve purchased, a survey suggests.

And a similar number of people first heard the music they bought via a streaming service.

The resurgence of vinyl sales continues, with 637,000 units sold during the first quarter of this year, compared with 2.1million throughout 2014.

The ICM survey, reported by the BBC, says that 52% of those who buy vinyl have a turntable they use, while 41% own a turntable but don’t use it, and 7% don’t have one at all.

Meanwhile, 45% of those polled said the music they’d bought was first heard online.

Geoff Taylor, chief executive of the British Phonographic Industry, says: “Younger fans increasingly discover on digital, but collect on vinyl. They appreciate the immediacy and convenience of Spotify, Apple Music and Google Play, but still want to own and collect albums by artists they love.”

Sony Music International chairman Edgar Berger agrees: “You will find people having a paid streaming subscription, and at the same time buying vinyl, and I do believe that’s not an uncommon pattern. Streaming is for the convenience and, for some fans, vinyl is for the experience.”

The ratio of male buyers has remained constant at 8% of the population for several years, while the female buyer ratio has increased from 5% to 8% in the past year. A total of around one in ten people have bought vinyl over the previous twelve months, with awareness boosted by the annual Record Store Day, which takes place today (April 16).

RSD ambassadors Metallica will stream their performance from a California store later today.