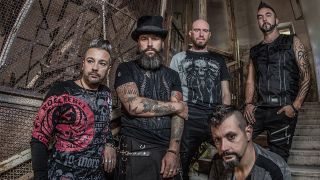 Italian prog metallers Methodica have released a video for their new single A Dystyopoian Tale. The new single, which is taken from the band's upcoming album Clockworks, features a guest vocal performance from Queensryche singer Todd La Torre. Clockworks will be released on October 2.

"The track is about a dystopian dark future, where machines rule over mankind," says singer Max Piubelli. "That’s only imagination, but you can find a clear connection with the current human addiction to technology. We asked Todd La Torre to be featured on A Dystopian Tale during our 2017 European tour as support for Queensryche. The song felt perfect for a duet, and Todd’s voice was just what the mood of the song needed. He enthusiastically accepted, and when we heard his vocal sessions we were left absolutely amazed. We are very proud of what we've achieved here, hope you're going to love it too."